Microsoft Surface line of dual-screen professional devices with high-end specifications could run a modified and optimized version of Windows OS. A leak from a reliable source claims the new, sleek version of the operating system could be called Windows 10X.

During earlier leaks, the tweaked version of the full-fledged Windows 10 has been referred to as different names like Windows Core OS or even Windows Lite. Needless to add, the rumored new name for the lighter version with features to benefit dual-screen devices could cause some confusion owing to the naming convention adopted for other Microsoft products.

Microsoft was long believed to be testing a modified version of Windows 10 that would most possibly power lightweight but premium Surface laptops. This secret version of Windows 10 OS was certainly different than most other variants of the operating system primarily because all of them were designed for laptops or desktops. The modified version was previously believed to be called Windows Core OS or WCOS.

Incidentally, a testbench running WCOS was recently spotted on popular, online benchmarking platform Geekbench. Although the specifications of the testbench were quite humble, experts indicated the very nature of the Windows Core OS was such that it was supposed to run on lightweight hardware effortlessly. This version, also believed to be called Windows Lite, would be devoid of several resource-hungry components, but surely retain the core aspects to run most tasks without taxing the CPU or battery.

The Microsoft Surface Centaurus would run this stripped-down and modular version of Windows claims Evan Blass. Several of his predictions have come true in the past, and hence it is quite likely that Microsoft could indeed embed the modified version within the Centaurus device, which Blass claims will be called Windows 10X. Strangely, the tweets appear to be deleted now. Hence, these rumors may not prove to be accurate. Still, Microsoft may not deploy a full-fledged version on Windows 10 on its latest Surface line of portable computing machines simply because battery-life is a growing concern with dual-screen devices. It is the display that invariably ends up consuming the most battery, and any technique that pushes battery life further is welcome. 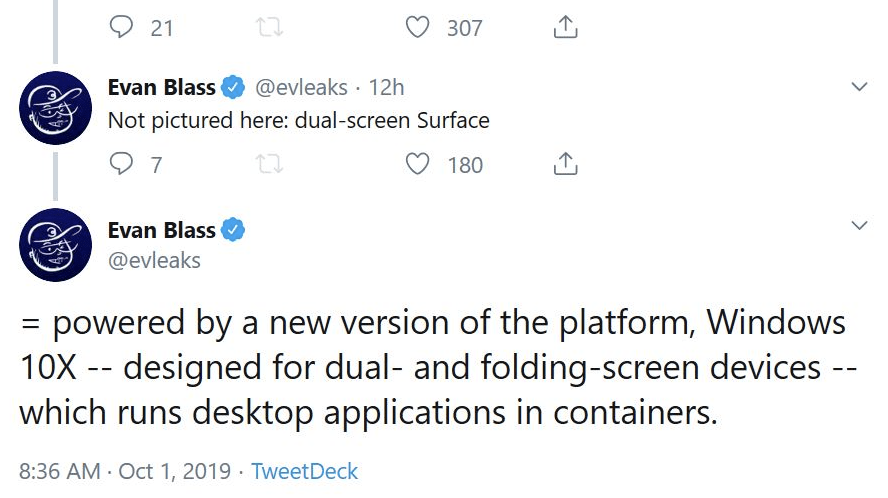 It is not immediately clear what the abbreviation of X in Windows 10X means. However, it may not be pronounced as ‘Ten’. It is quite likely that Windows 10X merely refers to a new variant of Windows 10 OS that is meant to run on dual-screen and foldable devices. The ‘X’ denotes the versatility of such devices that quickly fold in multiple ways to offer different functionalities. Some reports also claim Microsoft is working on ‘Surface X’, a new lineup of Surface-branded products, which could also be the ones that were previously codenamed Surface Centaurus.

Despite the elimination of CPU-intensive processes, the Windows 10X OS is expected to run Win32 or 32-bit applications. Although the OS could lack intrinsic capabilities, Windows Core OS could achieve the same with containers or local emulation. In any case. A large number of popular software platforms work reliably through web-browsers. These cloud-based applications simply do not need local processes, large DLL libraries or even application files. Hence, the Windows 10X should be optimized for internet-dependent platforms like Microsoft 365, and would also rely heavily on Artificial Intelligence (AI) to tweak performance for optimum functionality.

Microsoft Surface Centaurus foldable, dual-screen device running Windows 10X, is expected to ship with multiple sensor support and posture awareness. In other words, buyers can expect to operate the device using pen, voice, touch, even gaze. Based on earlier leaks, the new Surface devices could ship with Intel processors. However, reports also indicate they would also be available with ARM processors.