How To Make A Security Alarm Using Pir Sensor And Arduino?

Street crime is very common in the modern century. Everybody needs to feel secure when they are at home either while sleeping at night or during day time. So, many security alarm systems are available in the market. These systems are very efficient but costly. A burglar alarm or an intruder alarm is basically an electronic device that sounds an alarm when it detects an intruder in the home.  We can make an intruder alarm circuit at home which will be almost equally efficient for a specific range of distance and will be very low in cost. 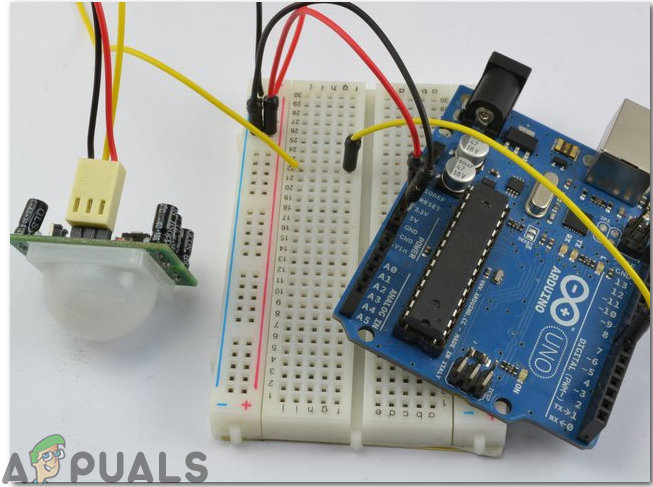 This article is about making an intruder alarm using Arduino and PIR sensor. When the PIR sensor will detect an intruder, it will send a signal to Arduino and the Arduino will sound an alarm. This circuit is very simple and will be designed on a Veroboard. This Veroboard will be installed at that place of the house where there is more danger of an intruder to get inside of the home.

How to design a PIR Sensor based Intruder Alarm?

The best approach to start any project is to make a list of components and going through a brief study of these components because no one will want to stick in the middle of a project just because of a missing component. Let’s make a list of components, purchase them and get started with the project. The Vero Board is preferred for assembling the circuit on hardware because if we assemble the components on breadboard they may detach from it and the circuit will become short hence, Veroboard is preferred.

Step 3: Working Of The Circuit

Now, as we know the main connections and also the complete circuit of our project, let us move ahead and start making the hardware of our project. One thing must be kept in mind that the circuit must be compact and the components must be placed so close.

Now verify all the connections by looking at the circuit diagram below: 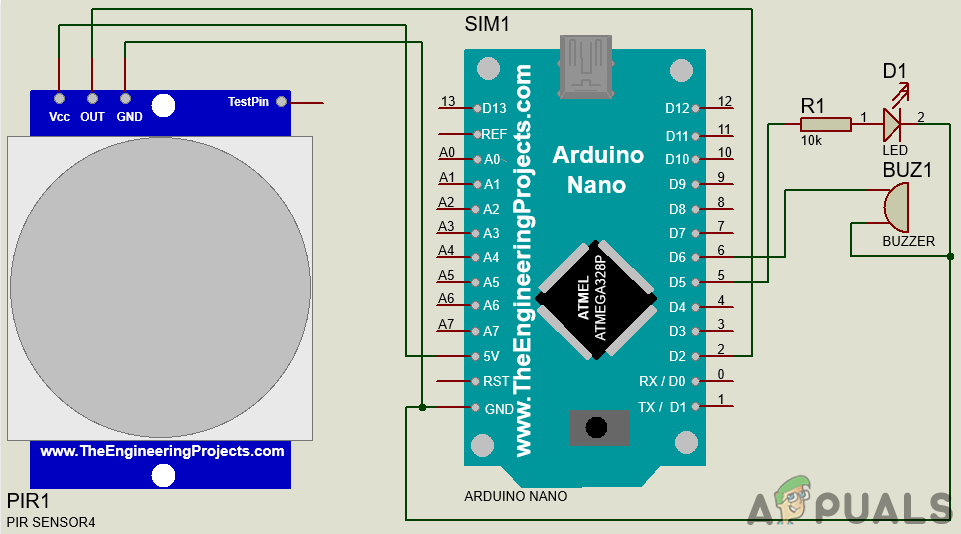 Circuit DiagramStep 5: Getting Started With Arduino

The code of this project is quite well commented and very easy to understand. But still, it is briefly explained below.

1. At the start, Pins of the Arduino are initialized which will be later connected to the LED and the buzzer. A variable is also declared that will store some values during run time. Then the initial state of the PIR is set to LOW, which means that it is told that no motion is detected initially.

2. void setup() is a function in which we initialize the pins of the Arduino board to be used as INPUT or OUTPUT. Baud rate is also set in this function. Baud rate is the bits per second speed by which the microcontroller communicates with the external devices.

3. void loop() is a function that runs again and again in a loop. In this function, the microcontroller is programmed so if it detects motion, it will send a signal to the buzzer and LED and switch them on. If the motion is not detected, it will not do anything.

void loop(){
val = digitalRead(inputPin); // read input value from the PIR sensor
if( val==HIGH ) // If motion is detected before
{
digitalWrite(ledPin, HIGH); // turn LED ON
digitalWrite(Buzzer, 1); // turn Buzzer ON
delay(5000); // create a delay of five seconds
if (pirState == LOW) { // if the state is low initaially, means no motion was detected before
// we have just turned on
Serial.println(“Motion detected!”); // Print oon serial monitor that the motion is detected
pirState = HIGH; // pirState is set to HIGH
}
}

else {
digitalWrite(ledPin, LOW); // turn LED OFF
digitalWrite(Buzzer, 0); // turn Buzzer OFF
if (pirState == HIGH){ // if the state is HIGH initaially, means some motion was detected before
// we have just turned off
Serial.println(“Motion ended!”); // Print on serial monitor that the motion has end
pirState = LOW; // pirState is set to LOW
}
}
}

So, this was the whole procedure to make a security alarm circuit at home, using a PIR sensor. You can now start working and make your own low-cost and efficient security alarm.