Nvidia just had their press event which was the first event of Gamescom 2018. CEO Jensen Huang took the stage to finally launch the Geforce 20 series cards which are up for pre-orders now, along with many more exciting details. 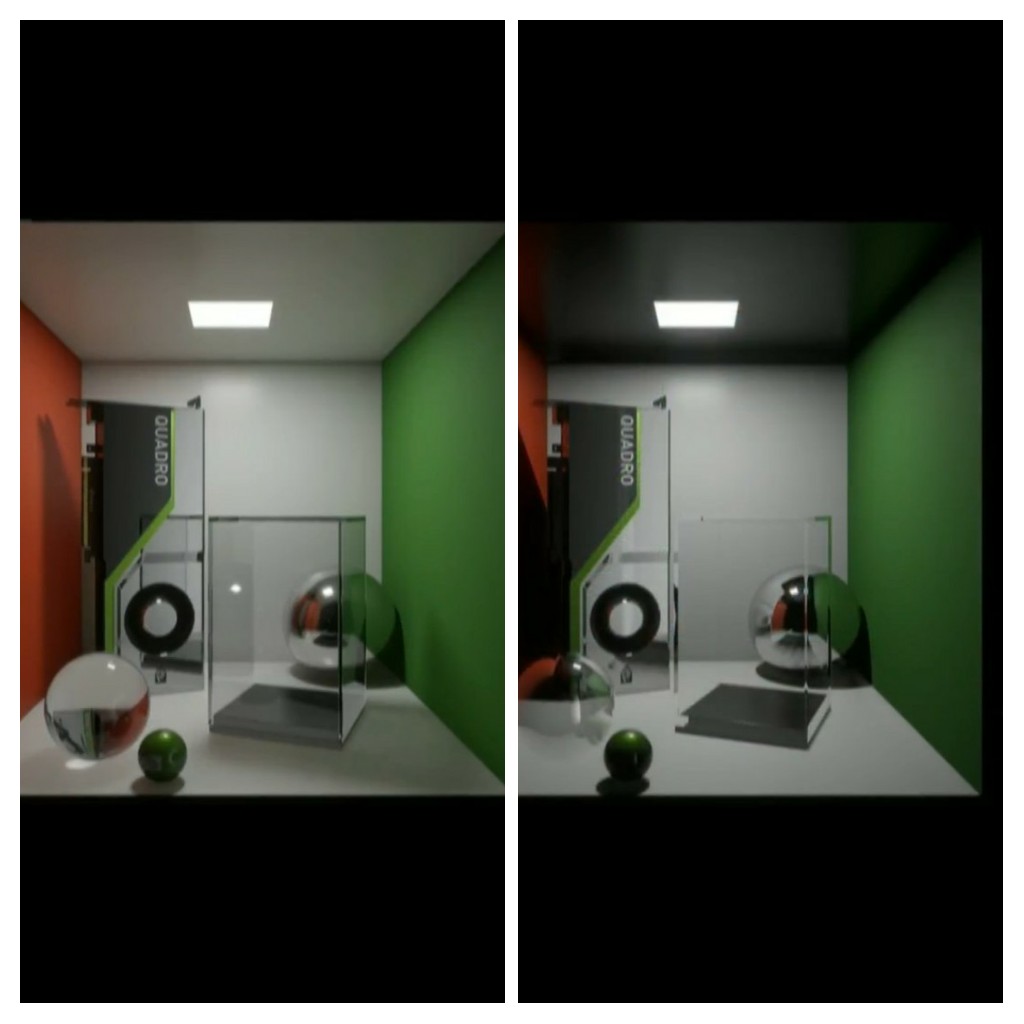 RTX enabled on the Left, RTX switched off on the right

One of the main talking points of the event was Ray-Tracing, which is being touted by Nvidia as the next best thing in computer graphics. Nvidia’s CEO in his press event explained that tracing every light ray in a scene made the scene look much more realistic, but it took a lot of processing power rendering it useless for real time use. But he went on to explain how Nvidia had worked around these issues using artificial intelligence and deep learning algorithms powered by their tensor cores.

We also got to see presentations of the RTX mode in action and it indeed made a big difference in every scene. Jenson stated that his research team at Nvidia were working on Ray-Tracing for quite a lot of time and how the RTX series was 10 years in the making. 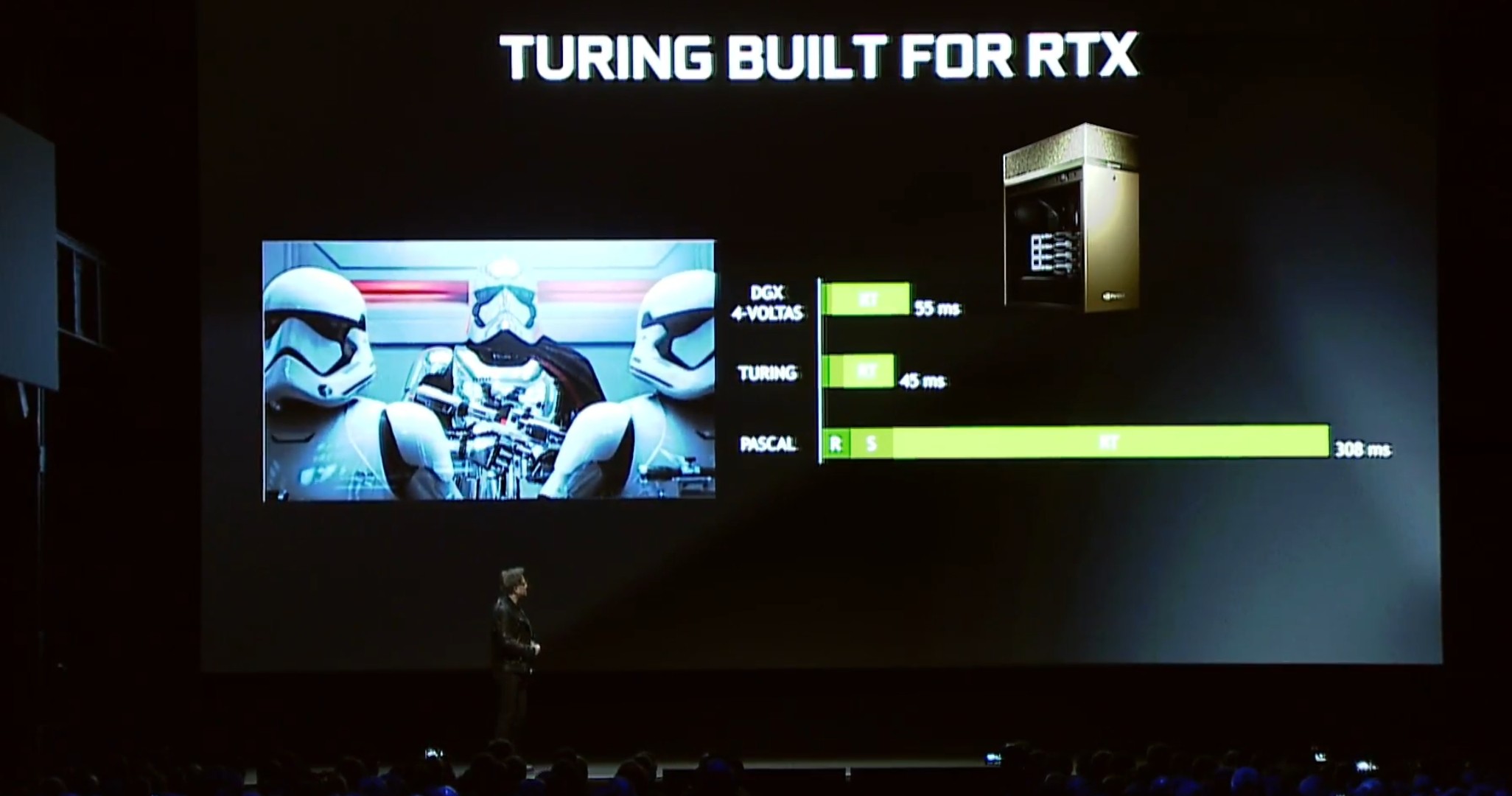 We also got to see some performance charts which showed off the RTX cards Ray-Tracing abilities which were very impressive. You can see above how Nvidia’s Turing cards are very efficient in RTX workloads and they are even faster than the DGX-4 Voltas in RTX workloads, which is a USD 68,000$ AI super computer. Pascal which powers the GeForce 10 series cards from Nvidia can be seen lagging way behind. This also means that the RTX option in games would only be available for the 20 series cards and previous generation cards wouldn’t be able to handle the RTX post processing. 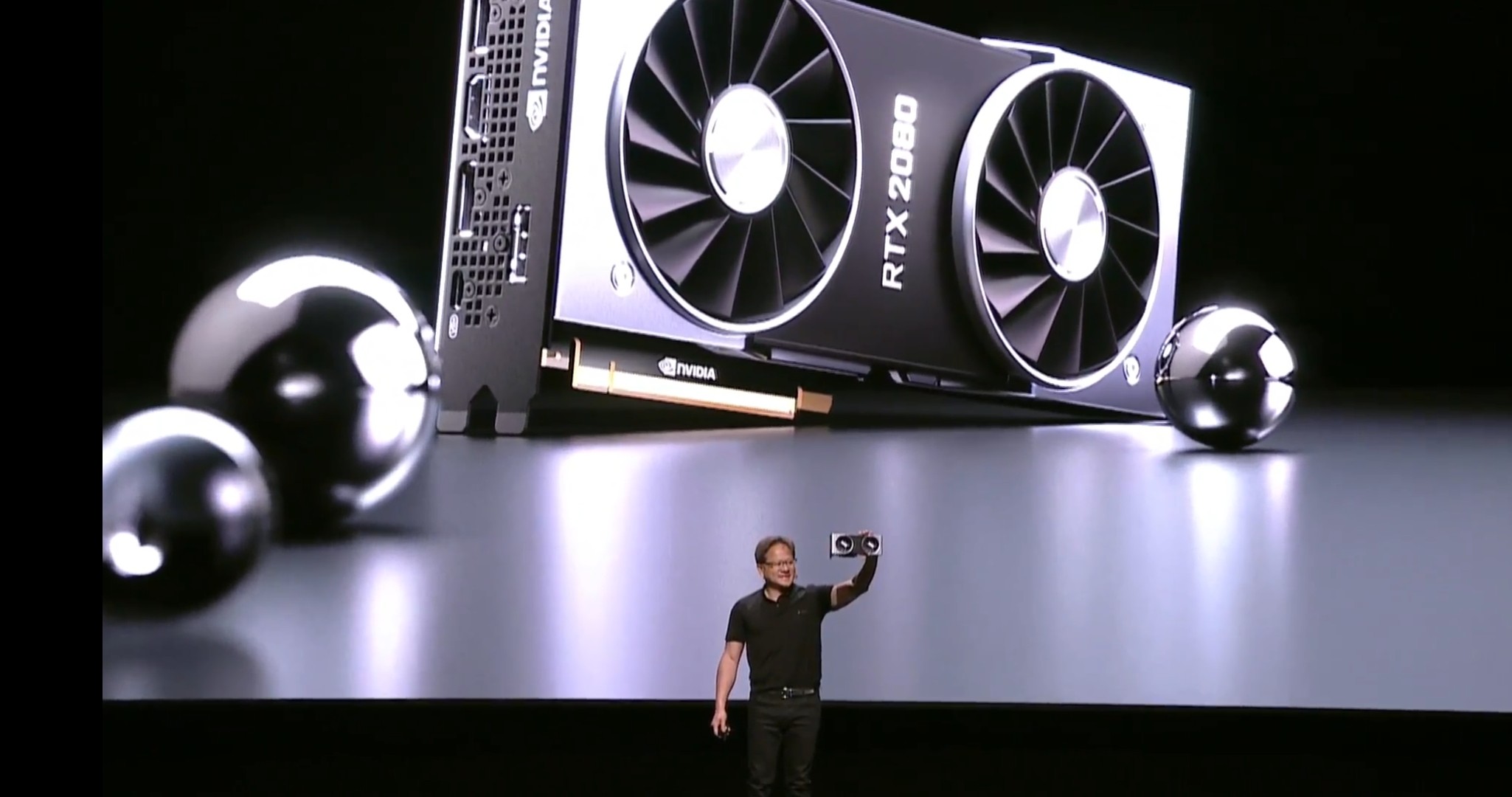 We also got our first look at the GeForce 20 series reference card design and it did have a dual fan design as the leaks suggested. We also got details on the three main cards in the Geforce 20 series, the RTX 2080 Ti, RTX 2080 and RTX 2070 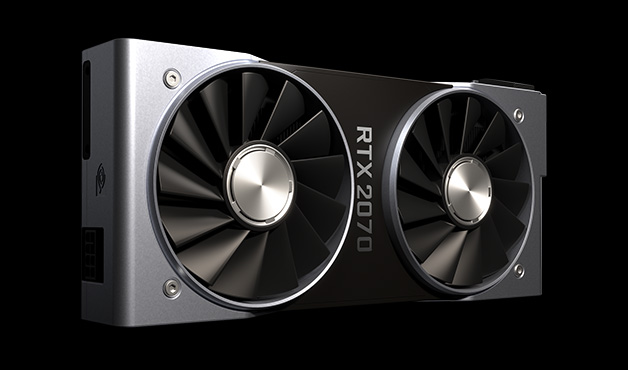 This was the cheapest card announced amongst the other two, yet Nvidia showed some impressive statistics on the RTX 2070. This card will be based on the TU104 platform, being manufactured on the 12nm process. Nvidia claimed that the GeForce RTX 2070 was indeed faster than their own flagship, the Titan Xp. Although it might be true for RTX workloads and games, the Titan Xp would still be faster at everything else. The card was announced at an impressive price of 500$ USD in the event but pre-orders from Nvidia’s own website price them at 600$ USD. 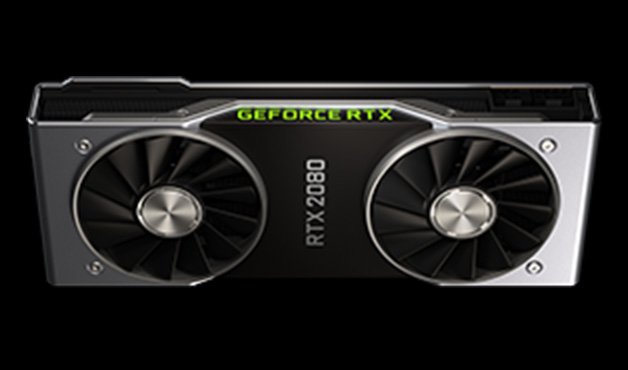 This again is a premium offering from Nvidia with premium performance. The Geforce RTX 2080 will have a Boost clock of 1800 MHz and base clock of 1515 MHz. The card will come with 2944 CUDA cores with 8 GB of GDDR6 memory. This is inline with what we have seen in the leaks. The Founders Edition of the RTX 2080 will be priced at $799 USD. 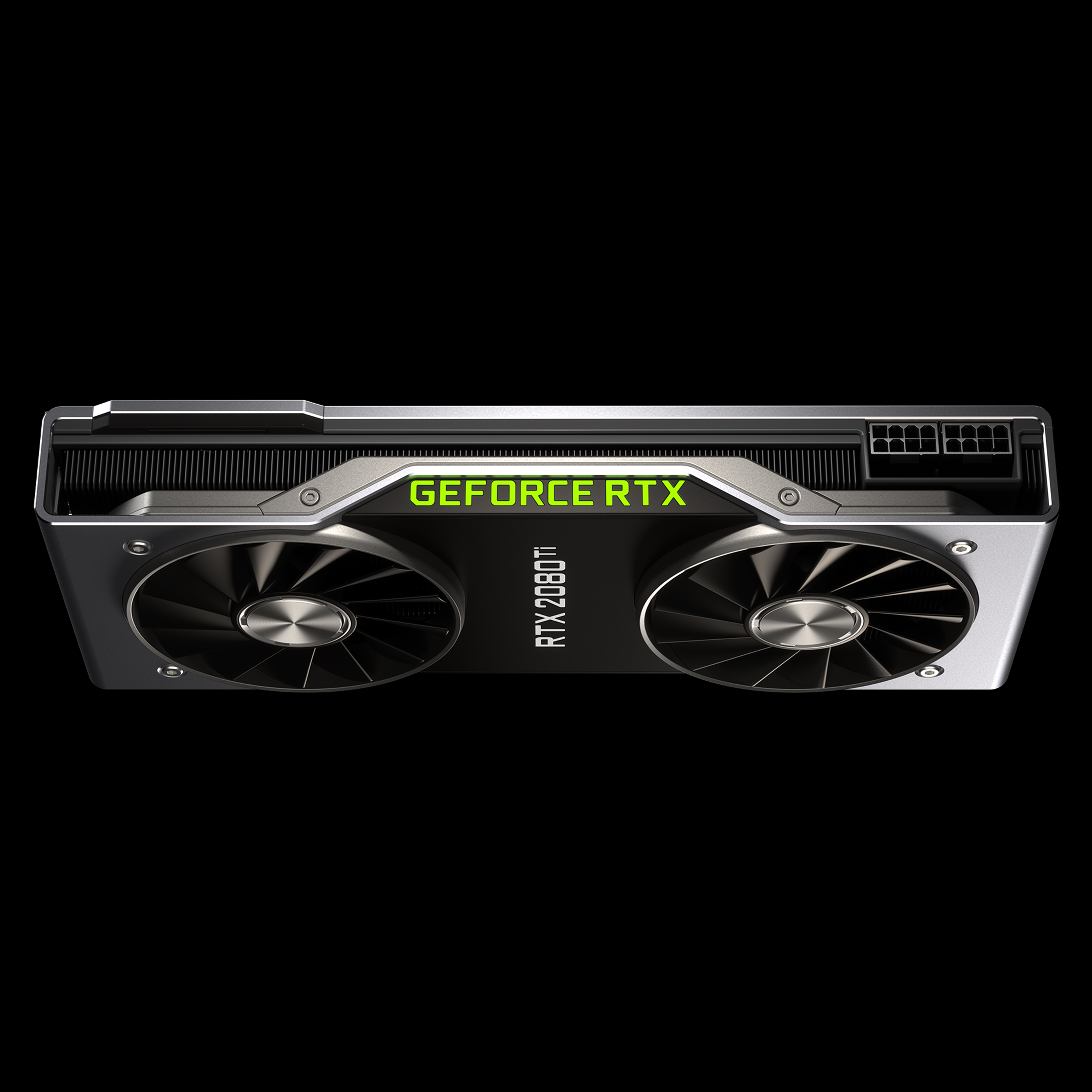 The Holy Grail of graphical performance and Nvidia’s top of the line card. Nvidia stated that the RTX 2080 Ti is 10 times faster than the GTX 1080 Ti when it comes to AI workloads and about 6 times faster in Ray Tracing. The card will also be significantly faster in general performance, but we will have to wait for benchmarks to see the difference. This card will have a whopping 4352 CUDA Cores with a boost clock of upto 1635MHz. The RTX 2080 Ti will also have more memory bandwidth due to its bigger 352-bit memory interface and 11GBs of GDDR6 memory. The Founders Edition of this card will set you back by $1,199 USD and is now up for pre-orders at Nvidia’s official website.

What is the use of all this power if there are no games to go along with this, so Nvidia made sure that we have significant game announcements in their Gamescom Keynote.

As you can see, there is a mix of new titles and old ones that will implement RTX in their games. We have many big titles in the list like Metro Exodus, Players Unknown’s Battleground, Tomb Raider and Battlefield 5. The inclusion of PUBG is interesting here, because that implies RTX can be implemented in launched titles too, so we might see this feature come to many more titles which have already launched. We also got the dates for the Open Beta in Battlefield 5 which will be open for everyone on 6th August.

The introduction of RTX does seem to open a huge number of possibilities and this is not only for games, as this tech has also been implemented in the Quadro cards, which will enable faster rendering of scenes in games and movies which more accurate lighting. RTX 2080 and RTX 2080 Ti will be available for purchase soon and the RTX 2070 will be available from September. But to the dismay of gamers on a budget, we didn’t get any information about the GTX 2050 and the GTX 2060, although Nvidia will definitely announce the budget cards at a later date.