It has not been long that Apple got out of the Siri information debacle that it is in the news again, this week. According to a recent article by a German website, Winfuture, the company has made certain changes to its Safari browser.

It was back in the day that the idea of phishing and pharming was quite common. These were the days when browsers started pushing “safe browsing“. What this did was see the trends from its database and report back to the user. Not to get into the nitty-gritty details with a bunch of jargon but there is a whole mechanism of managing this. Google is currently the main authority when it comes to this particular type of website management. Google calls it the Google Safe Browsing Service.

Anyway, getting back to the point on the article, Apple, which previously relied solely on Google Safe Browsing has now transitioned to another source. This is a Chinese company, Tencent. While many may not know of the company, they surely have used their products. While the company is a multinational conglomerate holding company, it is best known for Fortnite, PubG and the recent release, Call of Duty Mobile. Now, if users navigate to a site which is, in layman terms, sketchy, Safari gives out the following message 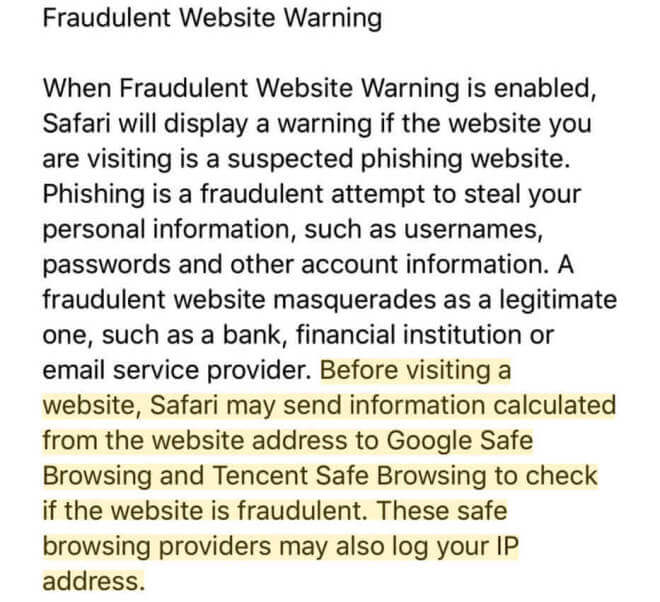 The feature was initially pushed for the Chinese market after the WWDC in 2017. No one really knows why Apple started to opt for it but perhaps that was a subtle testing phase. Now, we see that the company has pushed it to the rest of the world as well.

While it shows it as a good sign since the company would have a much more effective system to protect its users. This is because of the wide array of databases both the companies would bring to the table. But, the problem comes with the American-Chinese relations lately and Chineses’ take on privacy. Tencent has been known to work with the government as well. This would surely make people speak out their concerns about the platform and their privacy being under threat.