Nvidia’S Released The New Rtx Super Skus: Here Is How Nvidia Managed To Hit The Sweet Price To Performance Spot

Nvidia released the Turing architecture in September last year, with it we got RTX’s first line of Graphics cards. Since Nvidia enjoys some form of monopoly in the high-end GPU market, it allowed them to price their cards with a more open hand. Hence, Nvidia chose to get the most out of these in a monetary sense. It was the first time a flagship GPU was priced over a thousand dollars.

Fast forward to now, we have a bunch of graphics cards that are based on the Turing architecture. Some of these cards only utilize the CUDA cores and hence have the traditional GTX prefix. A few days ago Nvidia refreshed its upper middle-end GPUs and released the RTX 2060 SUPER and RTX 2070 SUPER. The RTX 2080 SUPER will be released on the 23rd of July. The reason these graphics cards were released at this time of the year is AMD’s new Navi graphics cards. Today we are only looking at these graphics cards while asking the question: Has Nvidia managed to hit the sweet price to performance spot? 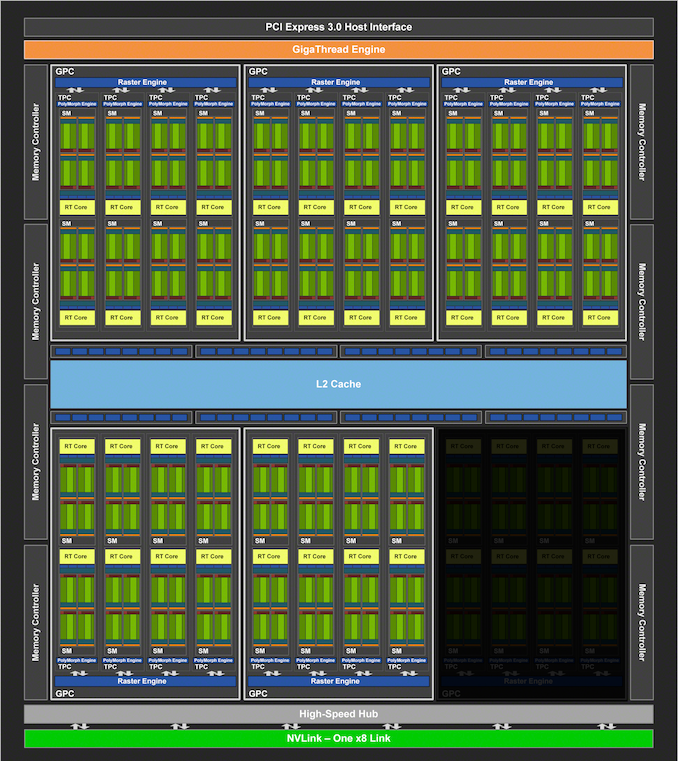 The RTX 2070 SUPER can be regarded as an “effective” replacement of the old RTX 2080. Nvidia shifted the 2070 SUPER to the more respectable TU 104 GPU die instead of the TU 106 used previously. The spec bump is not as significant as the spec bump of the 2060 SUPER, but its there. It now has 40 SMs, which means the total CUDA core count becomes 2,560, the clock speeds are also increased to 1605 MHz. Lastly, the VRAM stays the same as before.

If we look at the RTX 2080, RTX 2070, RTX 2070 SUPER and RTX 2060 SUPER, we can see that all these graphics cards now share exactly same VRAM configuration. Only, the amount of CUDA cores, Tensor cores, and the RT cores differentiates them. This move is not only beneficial for consumers when they are deciding to buy a graphics card but also for the game developers too since the 8GB module is now becoming a standard in the industry.

Shadow of the Tomb Raider

Shadow of the Tomb Raider is the final installation of the Tomb Raider reboot trilogy. Developed by Square Enix the game fully utilizes the DX 12 and DXR too (for some part) APIs. Square Enix does not recommend playing the game at DX 11, which is why the game works even better when you have a newer graphics card. The third person perspective, the shadow quality, and the high definition textures make it a hardware taxing game on any platform. The RTX 2060 and 2070 SUPER managed to tame the game at the 1440p resolution. The RTX 2060 SUPER was very close to the RTX 2070 similarly the difference between RTX 2070 SUPER and the RTX 2080 was not much. 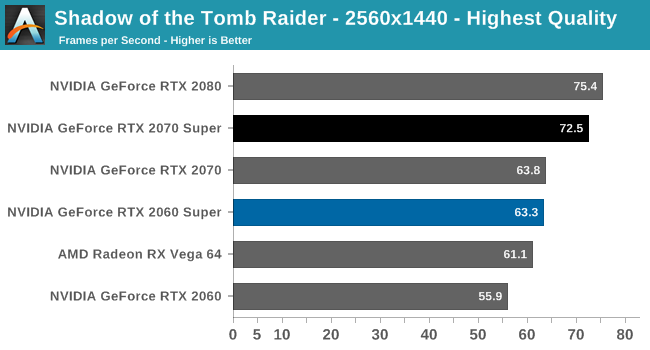 Metro Exodus is the only game that utilizes the RT cores in these RTX graphics cards effectively. 4A Games develop the game and published it. It is the third installment of the series and takes the game into a beautiful post-apocalyptic open world. This first person shooter has a big horror element, with densely lit areas and shadowy areas.

The game employs Ray tracing in the areas where there is no lighting. It is the reason why the game requires raw power to run even when there is no ray tracing. Both graphics cards could not manage to hit the 60 FPS at 1440p. However, the RTX 2060 SUPER managed to attain more frames than the RTX 2070 while the FPS difference between the RTX 2080 and the RTX 2070 SUPER was even less. 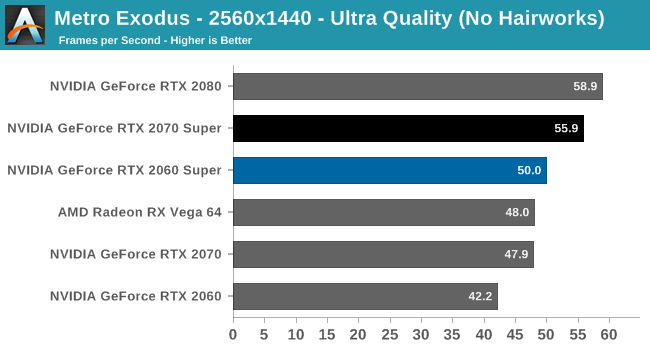 Strange Brigade is the least taxing game of the list. It is the only game that does not utilize ray tracing technology. Rebellion studios developed the third person cooperative shooter game. The game is a technological masterpiece as it is built around both Vulkan and DX 12 APIs and has HDR support. Moreover, the game also gives an option to toggle asynchronous compute on and off.

To test the graphics cards in question, we looked at Anandtech’s results with the DX 12 API with async compute turned off. The game effectively distinguishes between the hardware and is the reason why it is present in the list. Both graphics cards managed to put more than 120 frames easily at 1440p ultra settings. The RTX 2060 SUPER managed to come close to the RTX 2070 with only a 1 FPS difference. The RTX 2070 SUPER and the RTX 2080 were very close too. The difference of 10 FPS at this range does not matter (unless you are using a 144hz monitor). 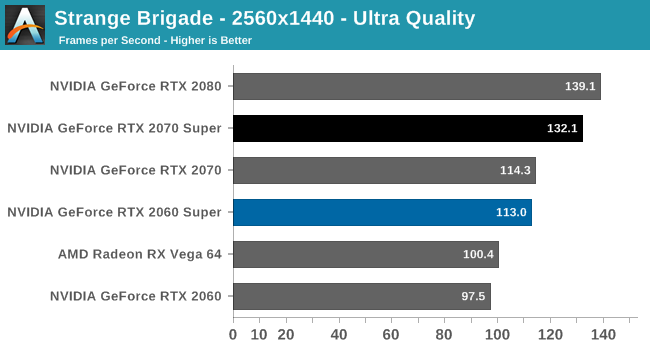 Coming to the overarching price to performance ratio question. The MSRP of the RTX 2060 SUPER is $399, which is 50 dollars more than the RTX 2060. The cost of RTX 2070 SUPER is $499, which is 100 dollars less than the price of founders edition RTX 2070 graphics card. In Anandtech’s Shadow of the Tomb Raider benchmark, the price/performance is 0.15 dollar per FPS, which is more than 0.10 price/performance of RTX 2070. The RTX 2060 is out of the question here as it could not manage to output 60 FPS.

The difference in performance is largely to the use of optimized FFN 12nm process from TSMC. Nvidia has also optimized its GPUs by partnering with many game developers. The only concern that we had when Nvidia announced the Turing architecture was pricing. Now, that they have finally been able to adjust the prices of the graphics cards, the RTX lineup makes a lot more sense. All of this is because of the threat that AMD’s Navi graphics cards were posing.

Today, we asked a question regarding the price/performance ratio of the new SUPER SKUs of Nvidia. These graphics cards are not only better in terms of performance but also are priced competitively. Moreover, Nvidia is also offering Wolfenstein Young Blood and Control. Both games have Ray Tracing and have not been released yet. Which means Nvidia is offering $120 worth (both are full priced games) of goodies with the graphics cards making them a much better deal after all.

All in all, with the release of the SUPER SKUs Nvidia, has finally delivered its promise of “gaming for all.”  If you are deciding between them, the RTX 2070 SUPER is a better deal though it costs $100 more. The performance difference is enough to justify the 100$ premium (over the 2060 Super). You can head over to Anandtech to read their very well written review and have a more comprehensive look at thermals and other benchmarks.