The Comet Lake architecture is going to be the next ‘big’ upgrade from Intel for the consumer market. We have already seen the MSI motherboards for the new architecture thanks to ECC database. It is speculated that the new processors under the Comet Lake will be announced at the end of the current year with availability in Q1 of 2020. It has been heavily leaked already, and now we have a benchmark of one of the flagship processors that the Comet Lake lineup will offer.

A twitter handle leaked the benchmark in question. The Geekbench score does show a new 10th gen processor but the details that the database offers questions the leak’s authenticity. The benchmark in question was taken from a DELL precision 5820 tower computer from the flagship X series. It shows the Core i9-10900X based on the 14nm++ processing node. It could possess further node improvement under the 14nm++(+) processing node. More importantly, if you were hoping to get the gains of the new 10nm architecture, then these processors are not for you. It has 10 multi-threaded cores with a base clock speed of 3.46GHz and a boost clock speed of 4.39GHz. 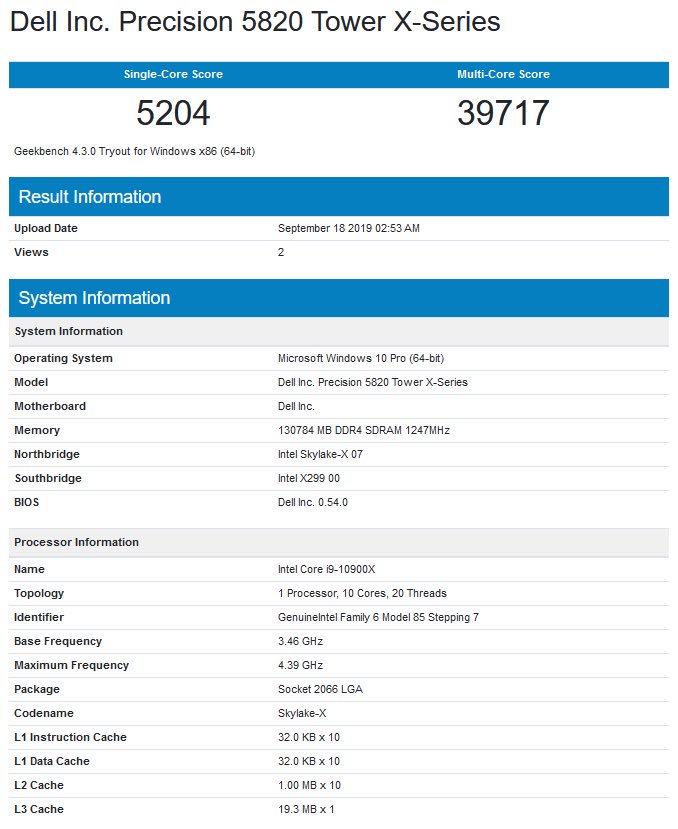 These processors will come with a new chipset design too. These processors will shift to the new LGA 1200 socket which unfortunately is not backwards compatible. Come Lake S is Intel’s plan to incorporate high core processors in the consumer market. It will feature as many as 10 cores in its mainstream lineup of processors. Since it is based on the matured 14nm manufacturing process, we can expect high clock speeds in almost all cores.

Lastly, Intel’s decision to stick with the 14nm process may seem a blessing in disguise. The clock speed gains from using the matured 14nm processing node are higher than the IPC gains from the 10nm process. Thus the shift to the 10nm architecture is going to be tough for Intel at least in the consumer market. According to Wccftech, the shift towards the 10nm manufacturing process may seem viable for the mobile CPUs since the clock speeds are not that high. Consequently, the CometLake lineup may not be the best upgrade from Intel but it may redeem Intel’s lost respect in the Silicon market.