Microsoft is hard at work lately with Windows 10: its premiere software experience. We reported that Microsoft has already integrated PWA into Windows 10 and released PWA builder 2.0 for the developers. On the other hand, they have started notifying Windows 7 users to upgrade to the bigger and better software experience. This does not end now, in fact, Windows May update in around the corner and Microsoft released key details regarding the update.

The feature update will come with specific refinements in the Start menu along with the cumulative security patches and performance improvements. The new update is not as rigorous as the previous ones, but the refinements will enhance the overall experience and performance of the system.

Being totally aware of what happened to the previous feature update aka October 2018 update, Microsoft is trying hard to make the update available for the consumers in May. Though the feature set is limited, one should look forward to the new update. Especially those who actively use the Start Menu. So, without further ado let’s dig into the update.

If you take a good look into the start menu you may found that it is replete with many folders and apps you do not use. If you start to unpin them from the start menu, it will literally take a lot of your time. Since you will have to remove the sub-tiles first and then proceed to the actual pin. The new update removes that and allows users to unpin all tiles in a group instantaneously. 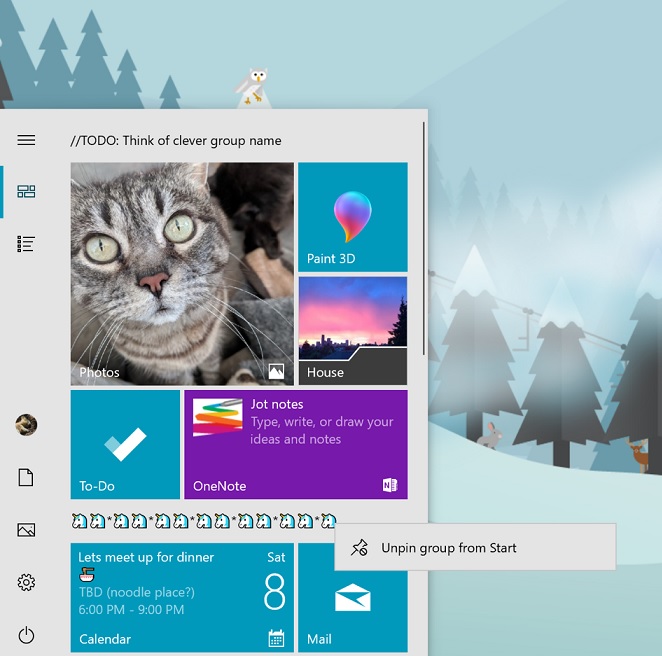 Like any other operating system, Windows 10 comes with its share of bloatware. Bloatware constitutes of unwanted software, apps that the operating system offers you when you install it. Microsoft has been relatively generous regarding uninstallation of such apps. With the new update, they have doubled the pre-built apps that you can uninstall from your system.

The functionality is also added to the Start menu folder. It means you can head into all apps and uninstall (allowed) pre-built apps there once and for all.

The May update removes that by making a separate process for any tasks related to the Start menu. With its own process, the start menu will perform better and consequently, the whole OS will become fluent.

Lastly, the new update brings aesthetic improvements to the (you guessed it) Start menu. The overall design has become fluent. In addition to it whenever you hover the mouse over the button labels, the navigation panel will expand allowing the user to use the button efficiently.

All in all, it seems that the new update does not bring significant features to the table. However, it is clear that Microsoft is trying very hard to make the overall experience of Windows 10 smoother and better. It does not matter how often you use the Start menu, it is an integral part of Windows 10.