The South Korean giant recently took the stage in NYC to unveil the much-awaited flagships duo Galaxy Note 10 and Galaxy Note 10+. Like every year the Samsung’s flagship Phablet phone was one of the most anticipated phones of this year. Apart from bringing the cosmetic changes in the design department, the Galaxy Note 10 lineup is running on Samsung’s latest finest Exynos 9825 SoC.

The most promising aspect of Exynos 9825 is being the one of its kind SoC produced using 7nm EUV process. Just for the sake of reminder the Exynos 9825 predecessor was built on the DUV process. It’s good to see that Samsung opted the latest process for the Exynos 9825 production. The upcoming 7nm and 5nm Chipsets will be built on a similar process. After the announcement of Galaxy Note 10+ with the latest SoC, everyone is keen to know about the GPU performance improvements over the predecessor.

Recently the well-known publication GSMArena conducted several Benchmark tests of Note 10+ running on the Exynos 9825 SoC. The latest Exynos 9825 chipset GPU clocking speed is slightly better than the predecessor. Before going into details, it is important to mention the tests were conducted on the pre-production unit with Performance mode activated. The results may differ when the retail unit will be out with new software updates.

In the multi-core performance, the Galaxy Note 10+ once again failed to impress. It lags behind not only the Snapdragon 855 driven phones but also the Kirin 980 powered P30 Pro outperforms it. The iPhone XS Max is once again on top with an impressive 11432 scores. The Galaxy Note 10+ is at the bottom with 9751 points.

Fortunately, the Galaxy Note 10+ meets expectations in the graphics performance. Thanks to the GPU boost the Note 10+ brings improvement in almost all tests over the Galaxy S10+. However, it is important to mention that the improvements are not extraordinary instead the difference is quite minimal. 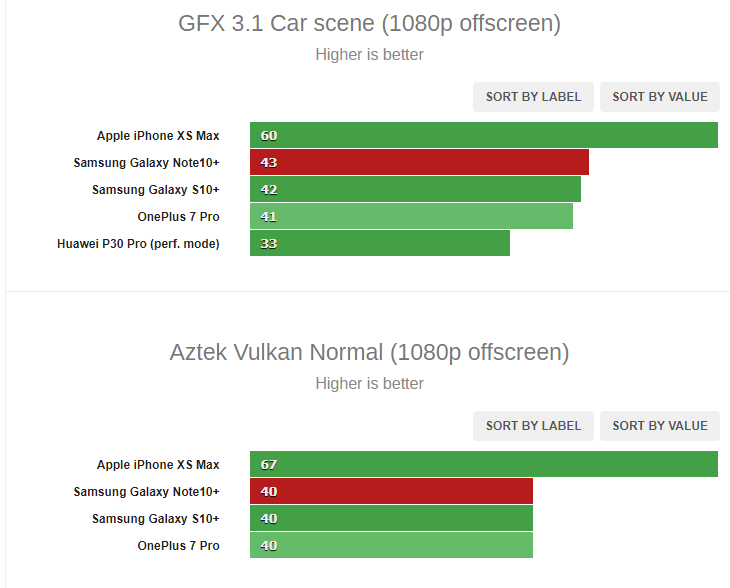 Recently Qualcomm announced the Snapdragon 855 Plus with higher clocking GPU. It will be interesting to see how the Galaxy Note 10+ GPU performance stacks up against the Qualcomm’s latest chipset. Overall the iPhone XS Max is still on top in the GPU performance with a huge margin. The aforementioned results are extracted from the pre-production unit, that’s why the final retail unit hopefully will perform better. Stay tuned, we will keep you updated.