Intel Might Not Have A Ryzen Competitor Until Q1 2020, Upcoming Comet Lake Cpus Still On 14Nm?

AMD was expected to impress with Ryzen’s 3000 series launch and impress they did. Although this wasn’t a surprise, AMD’s Zen architecture had a lot of potential and this was seen with Ryzen’s debut all the way back in 2017. With the 3000 series, we see more refined chips, with an improved process, better memory controllers, lower latency in the interconnect fabric and more cores among other things. At this point all eyes are on Intel, everyone is expecting them to answer with a stronger lineup. But that’s easier said than done and a recent leak from Xfastest suggests, Intel won’t have a proper answer until Q1 2020. 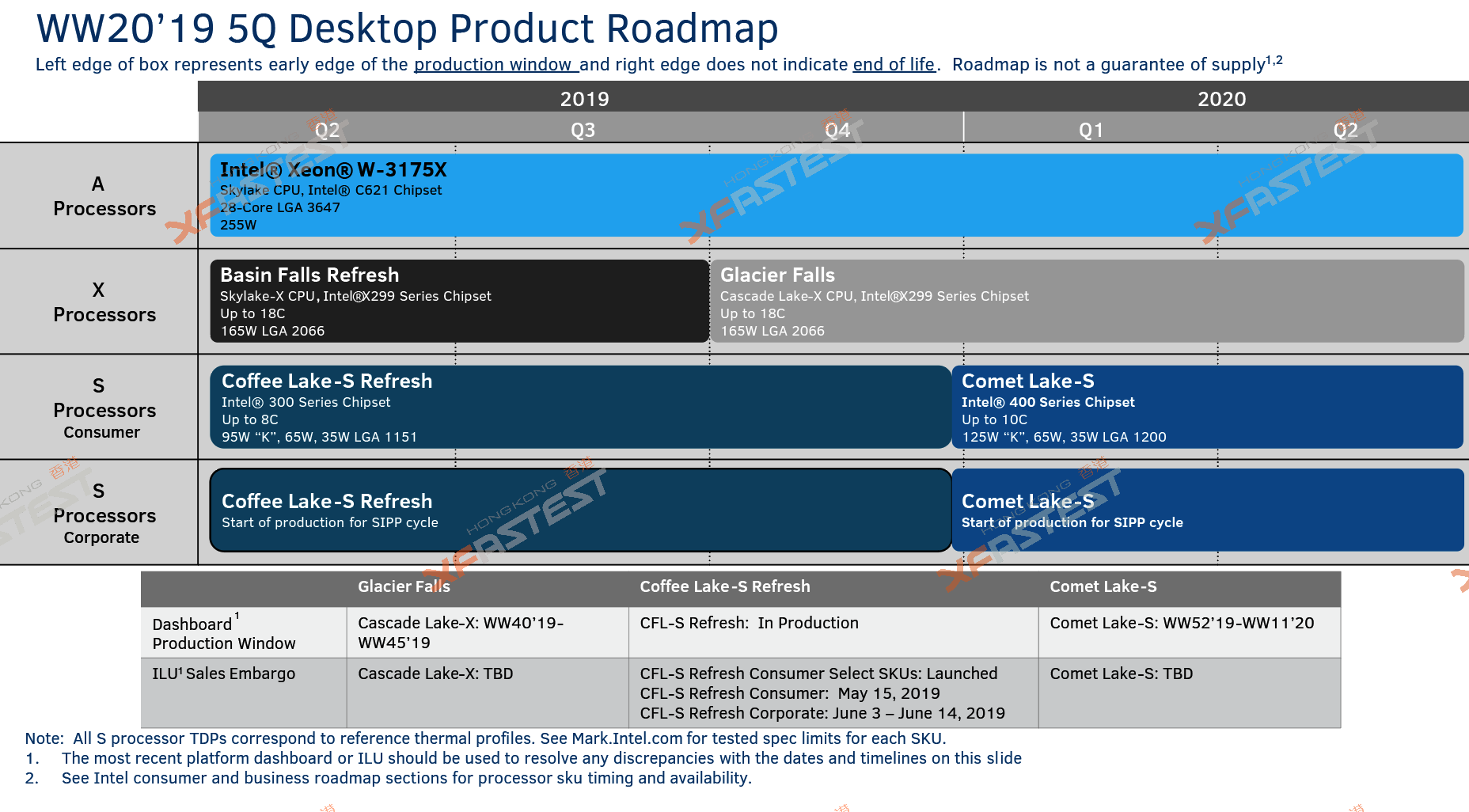 This roadmap is in line with some of the previous leaks we covered, including Cascade Lake’s impending release. The roadmap shows Comet Lake-S lined up for Q1 2020, housed by a new socket, LGA 1200. The slide mentions an increased core count taking the tally to 10. Comet Lake will be another 14nm refresh and it seems Intel is banking on increased core counts to offset some of the competition. 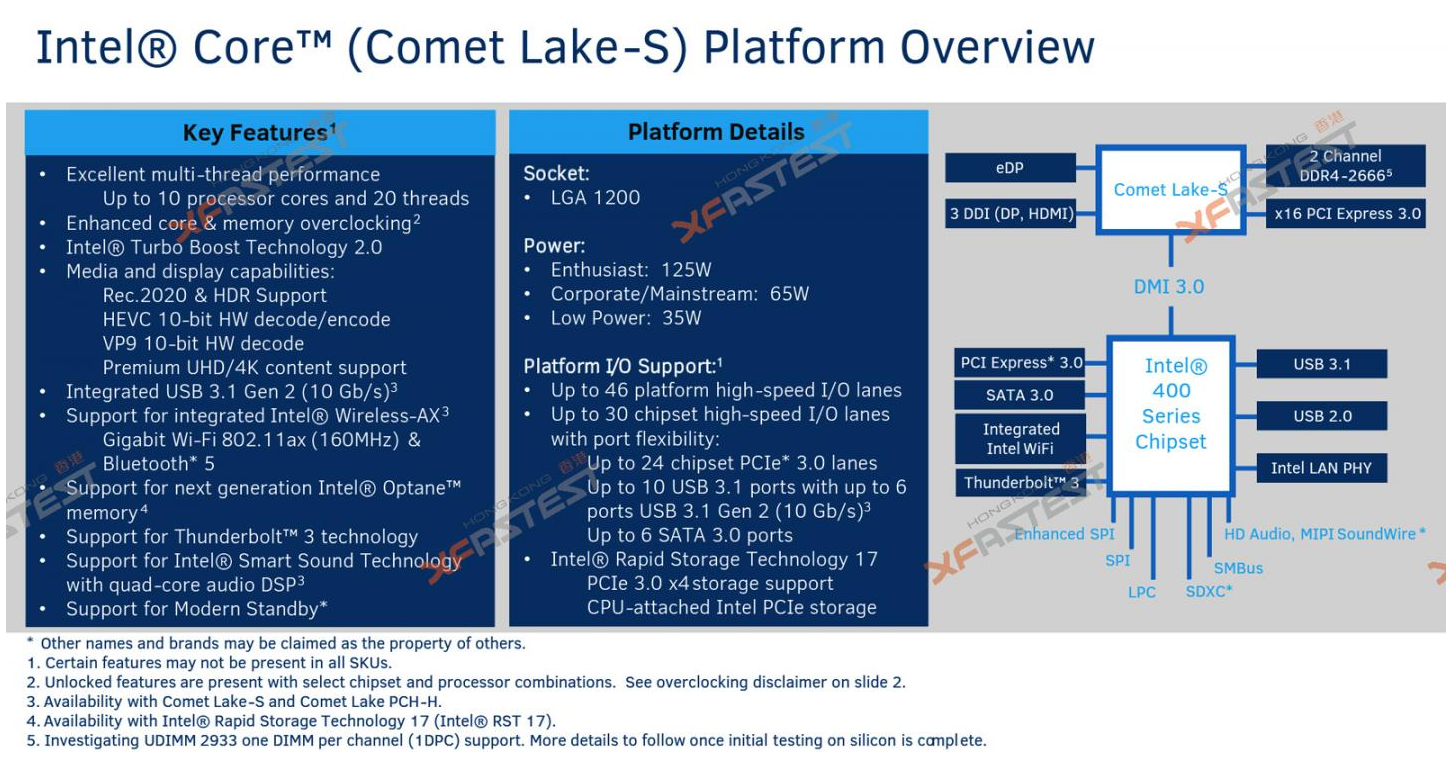 Most of the additions and improvements here are standard, although Hyper-Threading’s inclusion can be an interesting talking point. Most Intel CPUs were hit hard by speculative execution vulnerabilities often referred to as Spectre and Meltdown vulnerabilities. ExtremeTech has a very good article on this very topic where they talk with Theo de Raadt, the founder of OpenBSD. He suggests that Hyper-Threading is an inherent security risk and should be disabled by default. Intel suggests that there should be no reason to worry if the user has applied all the provided fixes and Windows patches. Hopefully, Intel has sorted this with Comet Lake as performance wise other chips were hit hard by the patches and updates.

A German Website, Computerbase reported on a recent leak on Comet Lake CPUs which listed spec details of the upcoming Comet Lake processors. 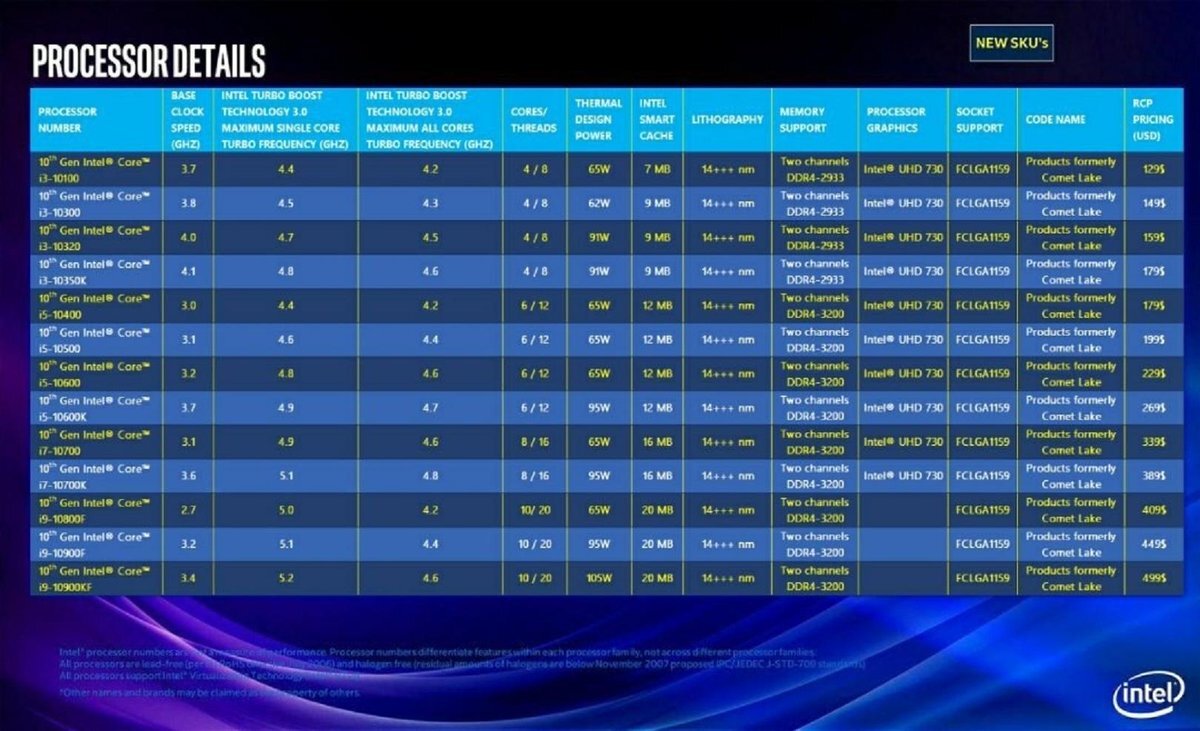 Right off the bat, we see improvements all across the board, mainly with higher clock frequencies on all chips. Cache amount has also been increased in most chips with the i5 line-up getting 12MBs across the board instead of 9MBs offered on last gen chips. Intel’s high-end desktop lineup the i9 10th Gen processors get a bump in core counts with 10C/20T being offered. Starting from the i7-10700K, we get to see boost clocks breaching the 5GHz mark, although this isn’t on all cores. Even the Ryzen 3900x is able to do 5GHz on a single core with a slight voltage bump, the only difference being you can buy the 3900x in retail locations now, can’t say the same for i9 10th Gen chips.

According to the leak, upcoming Comet Lake desktop CPUs will be another refresh on the same node. Some of us anticipated Intel will finally move to 10nm for Desktop CPUs as they already have some 10nm products with Sunny Cove cores. It’s fascinating to see Intel squeeze so much performance from their 14nm process, but will it be enough to surpass offerings from AMD?

This really doesn’t hurt Intel a lot, the desktop market is a very niche market now. Intel still holds a substantial lead in servers, HPCs and the Laptop market and that won’t be changing anytime soon. Like all leaks, take this information with a grain of salt, its not very likely we will see another 14nm refresh in 2020, fingers crossed.