It’s clear at this point that Chipzilla is in a slump and AMD is emerging as the go-to company for people building new desktops. Intel’s desktop Coffee lake lineup is showing signs of age and doesn’t offer much in terms of absolute value when compared to AMD’s 3rd Gen Ryzen chips. We know Comet Lake CPUs are coming next year but everyone has their doubts as to how much of a performance increase will the new series offer given its a 14nm refresh again. Intel realizes this and it seems their i5 lineup next year will have Multi-Threading support, some early specifications on the chip were found in the Sisoftware database by Wccftech.

The CPU in the database seems to be an early engineering sample clocked at 2 GHz with 6 cores and 12 threads. In an earlier leak, we reported about the i3 lineup getting Multi-Threading so its presence in the i5 lineup was more or less warranted. It seems Comet Lake’s entire line-up will have Multi-Threading now, something which was mostly exclusive to the i7s.

10th Gen CPUs Based On a New Chipset?

This is not surprising given Intel refreshes the platform with a new release every year, meaning you will need a new motherboard for Comet Lake CPUs. We reported on this a while back stating “According to a set of slides that leaked online recently, the new Intel 10th Gen Comet Lake-S CPUs will certainly require a new socket to work. The slides indicate the socket will be LGA 1200 and the motherboards will be 400-Series. The new CPUs will be divided into three power tiers: 125W, 65W and 35W. Needless to mention, these are certainly higher power ratings, but the top-end Intel CPUs will pack 10 Cores and 20 threads.”

“The 400-Series motherboard needed to support the new Intel CPUs may feature 49 additional pins for higher power delivery. It is important to note that besides the higher 125W TDP CPUs, Intel will still support and possibly release the 65W and even 35W TDP CPUs on the 14nm fabrication process. It is only the hardcore or enthusiast TDP bracket that would go up to 125W. As with most of Intel’s CPUs, the temporary boost clocks would as high possible on these new processors as well.”

Will Multi-Threading Be Enough To Face The Ryzen Onslaught?

Intel still holds a slight IPC advantage and with multi-threading and more cores coming next year, Comet Lake CPUs can be a good stop-gap solution at best. A lot will depend on pricing and giving away multi-threading support to lower-tier chips might cannibalize Intel’s own sales on the more premium CPUs.

With Comet Lake CPUs we might see very high clock speeds close to the 5 GHz mark on i5s, making these chips very lucrative for gaming rigs if priced correctly.

Back in June, we reported on a leak from Computerbase listing pricing and some specifications on the upcoming CPUs listed below. 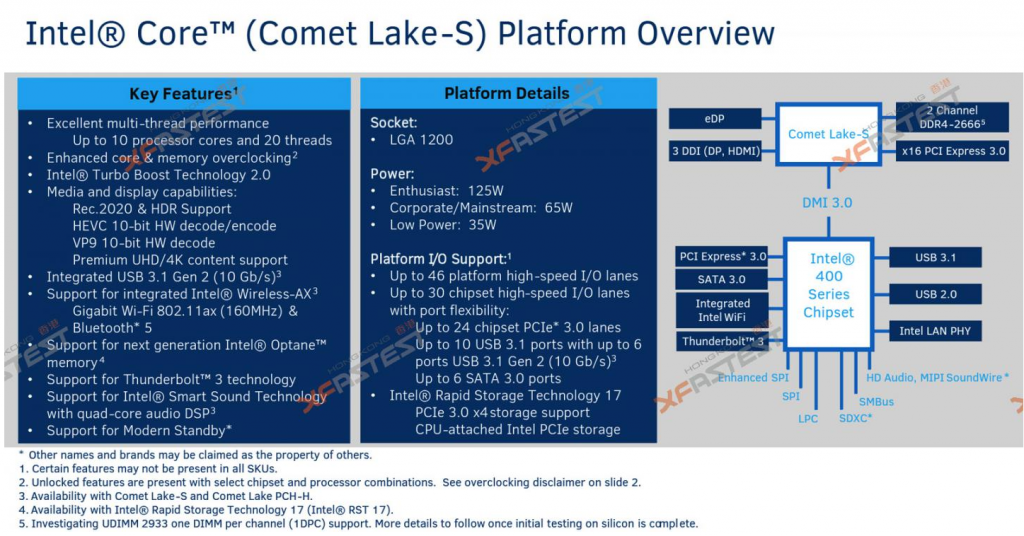 Xfastest also leaked some slides in June, showcasing some upcoming features listed below.