Whatsapp Reportedly Working On A Fix For Battery Drain Issue

WhatsApp recently rolled out a long due feature, fingerprint lock support for Android users. However, WhatsApp version 2.19.308 that added the added fingerprint lock functionality introduced a major bug for many users.

WhatsApp users reported that the update is causing massive battery drain on their Android phones. The problem mainly affected Samsung and OnePlus users. Ever since the latest update was installed, people noticed an average idle drain of around 33 to 40 %, which seems to be an alarming condition.

Additionally, people were also annoyed by the fact that their devices don’t charge fast enough to deal with the issue. According to WhatsApp users, they are constantly receiving high power consumption alerts and the intense power consumption forced their phones to heat up.

A Redditor who contacted WhatsApp to report the issue confirmed that WhatsApp is already working on a fix. You should expect a patch within the next few weeks. However, the WhatsApp CS team refused to comment on the issue and suggested users should visit the blog or Help Center for the latest updates. 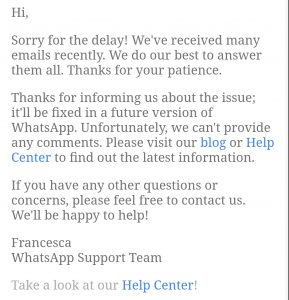 Meanwhile, WhatsApp users suggested some quick workarounds that might help you to limit the impact of this problem.

Some users suggested that you should reinstall the application from the Play Store. Some WhatsApp users confirmed that this solution made things better for them.

Some WhatsApp users managed to fix the issue (at least to some extent) by setting the battery optimization setting from Intelligent Control to Optimize. Furthermore, affected users should turn off WhatsApp Web as well.

Battery saver mode is a method that is always helpful to deal with battery drain issues. You should enable the battery saver mode on your affected devices to restrict the background activities. However, you won’t be receiving any new WhatsApp messages in that case.

If the problem still persists, there is another solution that could improve your battery life. Try installing the beta version of the app to get rid of the battery drain problem. It is worth mentioning that the beta versions are often prone to bugs and issues. However, it might be a good option until a corresponding patch is available.