One of the biggest problems that comes with having easy access to a massive digital game store is figuring out what to play. Steam, which is currently the largest PC gaming client, gives users recommendations on what to play next. It does this by taking into account many factors, such as ratings, and the types of games it thinks you prefer. Now, Valve has decided to take this one step further by utilizing machine learning to suggest users games that are more suited to their taste.

The interactive recommender is a new experimental feature for Steam. To keep it simple, this tool can be used by all Steam users to find out which game to play next. It’s a very intuitive system, allowing users to sort by genres, filter by tags, and adjust the time window of the results.

Valve explained the functioning of the interactive recommender in a blog post. Based on a neural network model, the recommender makes use of your playtime history along with “other salient data” to provide personalized results.

“We train the model based on data from many millions of Steam users and many billions of play sessions, giving us robust results that capture the nuances of different play patterns and covers our catalog. The model is parameterized so that we can restrict output to games released within a specified time-window, and can be adjusted to prefer games a higher or lower underlying popularity.” 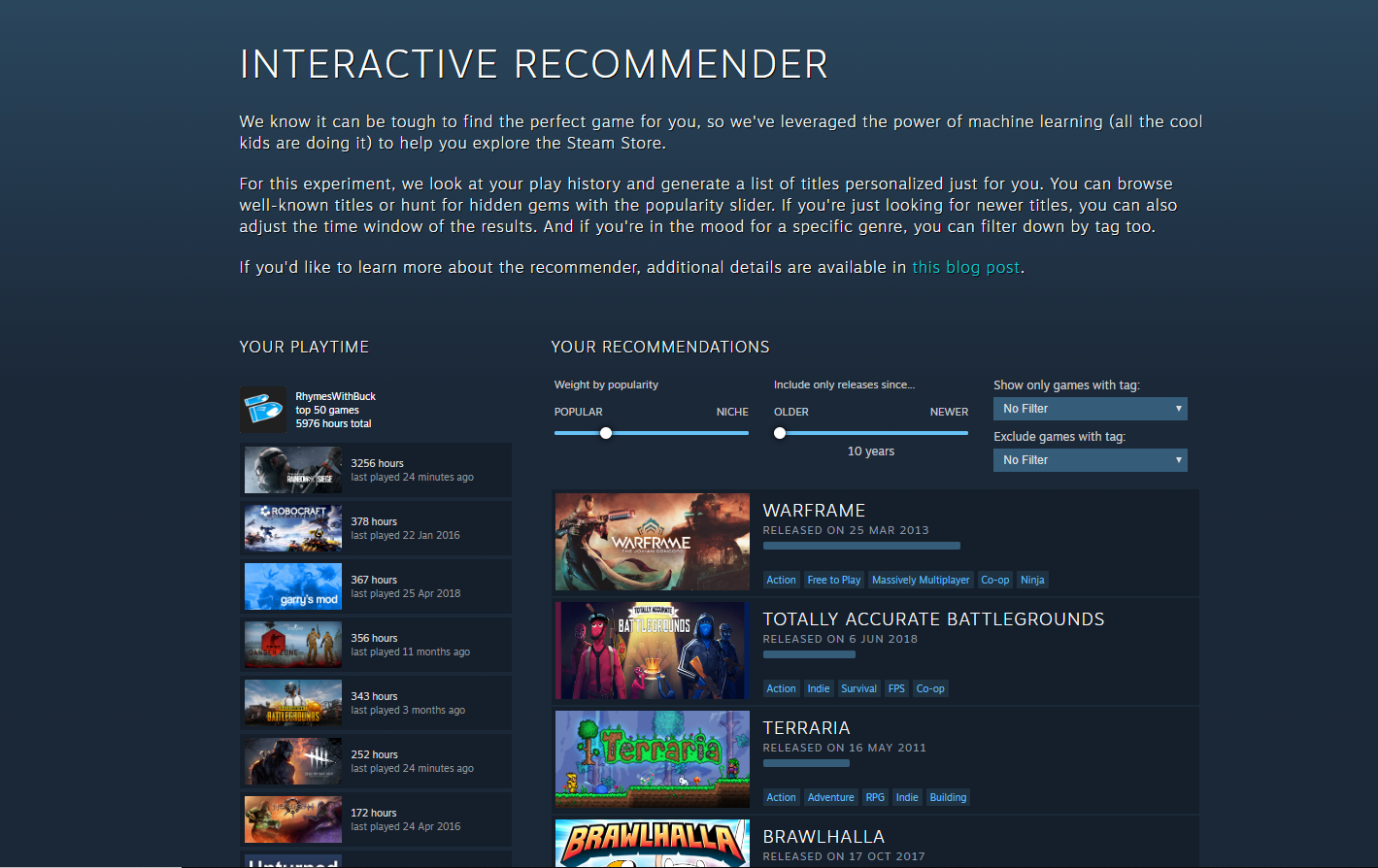 This brings up the question of how the recommender handles new games? Newly-released titles, especially those targeting a niche market, tend to have a weaker playerbase. Consequently, the neural network isn’t able to recommend games of which it has no data about. As such, Valve says that the recommender approaches these “cold starts” differently.

“It can react quite quickly, and when re-trained it picks up on new releases with just a few days of data. That said, it can’t fill the role played by the Discovery Queue in surfacing brand new content, and so we view this tool to be additive to existing mechanisms rather than a replacement for them.”

Another controversial topic is “The Algorithm”. Many believe that for a game to be seen by many users, it needs to be “optimized” for a certain model. Like the rest of Steam, this isn’t how the new interactive recommender works.

“We designed the recommender to be driven by what players do, not by extrinsic elements like tags or reviews. The best way for a developer to optimize for this model is to make a game that people enjoy playing. While it’s important to supply users with useful information about your game on its store page, you shouldn’t agonize about whether tags or other metadata will affect how a recommendations model sees your game.”

Although it’s still a work in progress, you can test out the new interactive recommender for yourself right now.