Microsoft has recently released a new update for Windows 10 Your Phone app. The update bumps the existing version of the application to 1.19082.1006.0. It brings some performance improvements and fixed a number of bugs in the previous version. The highlight of this update is a newly added battery indicator for Windows 10 users.

You can find the battery indicator beside the name of your smartphone. The new addition allows you to keep track of your battery right from your desktop. It eliminates the need to pick up your smartphone for that purpose.

If you are interested to get the battery indicator on your phone, visit Microsoft Store to download the latest version of Your Phone app on your system.

Your Phone App For Windows 10 To Get Call Support

You are wrong if you are thinking that the list of new features ends here. A Microsoft watcher Ajith spotted another major major development that brings call and dialer support for Your Phone app. Microsoft is currently testing the new functionality.

A toggle button in the Settings menu allows you to make and manage calls directly from your system. Once you turn on the toggle button, a Calls option will appear on the left-hand side of the main menu. Moreover, a dialer keypad will appear as soon as you click on the option. 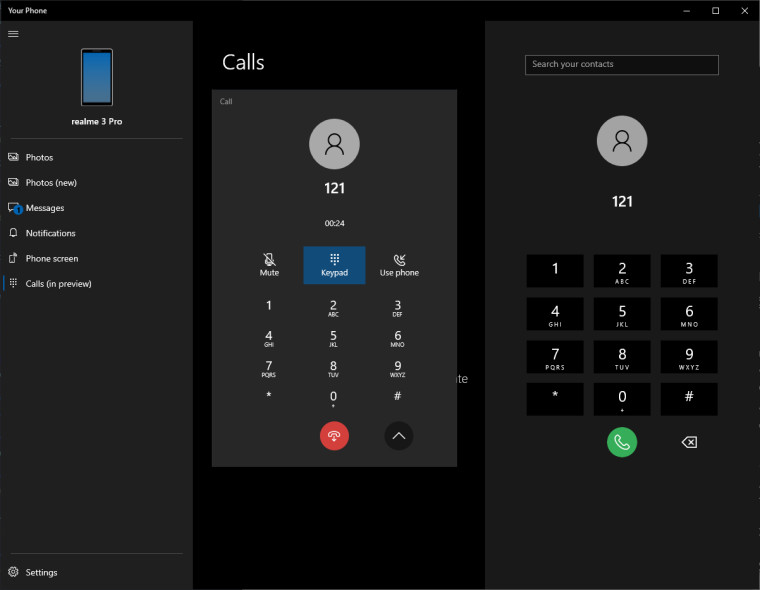 The dialer also allows you to directly call someone from your contact list. Microsoft plans to offer a more seamless experience to Windows 10 users as a part of this change. You will no longer need to grab your phone for making a call. Moving further, Microsoft kept UI of the center of the screen consistent with the smartphone that you see while making calls.

Call support for Your Phone app was one of the highly demanded features by Windows 10 users. However, Microsoft was secretly working on the functionality until now. The leaked screenshots bring a glimpse of its potential function in the upcoming version.

As mentioned earlier, the feature is currently in the experimental stages and it remains to be seen when Microsoft plans to officially release it. However, it seems like the development is in the final stages and you will see it soon on your systems.