We know that AMD has pretty much demolished Intel in the HEDT markets. The Threadripper processors from the 2nd gen (released last year) perform better than Intel’s relatively new Skylake X Xeon processors. On top of it, AMD’s offering was far cheaper, which increased the performance per dollar metric. Intel had reservations with the line of testing that the reviewers do with these chips. According to Intel, these tests/ benchmarks do not simulate ‘real-life’ scenarios. Intel specifically went against the use of Cinebench or other rendering based benchmarks as these benchmarks do not capture the level of performance that these processors can deliver.

The claims mentioned above by Intel only seem believable if one is a die-hard Intel fan. There can be no other reason for excluding one of the widest used benchmarks from the testing regime. The biggest chipmaker has also made a bold claim regarding its upcoming Cascade Lake X series of processors. These processors offer 2x more performance per dollar compared to the 2nd gen Threadripper processors. These results are based on Intel’s ‘real-life’ based testing regime since they did not identify the benchmark they used for their results. 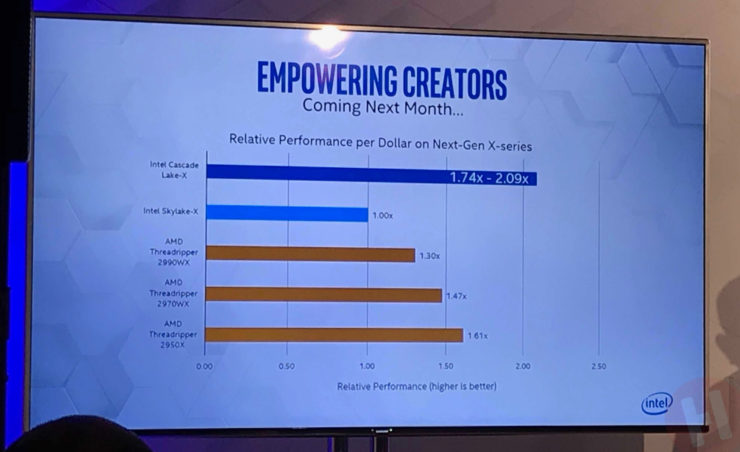 Lastly, to ease the availability of these processors, Intel is making sure that these processors work with the updated LGA 2066 sockets. They are also planning to shift the Xeon W processors to the new LGA 3647 platform. All of these policies do point towards the right direction from Intel, but we can only verify the claims of Intel when these devices roll out in the near future.