Last week Google pushed another beta release of its browser with several interesting features. Some major changes included in this update are a shared clipboard, DNS-over-HTTPS trail, and a tab freezing functionality for desktop users.

Apart from all the new features, the Chrome 79 beta came with some other changes as well. According to the forum reports, Google removed the overlay scrollbar in the Beta release. One of the users who recently installed Chrome Version 79.0.3945.16 confirmed the change in a Reddit thread:

“I CAN NOT stand the default scrollbar. It wastes so much space by being there all the time and it’s a disgusting light color all the time. Is there any way to get back the sleek and simple scrollbar that only shows up when you scroll or hover mouse over the side?“

According to a Reddit user @kirbyfan64sos, Google sets an expiration date for all the flags. The engineers need to merge the flags within a specified time duration otherwise the flag expires. Apparently the overlay scrollbar flag expired as the company was not interested in maintaining the feature.

It seems like the overlay scrollbar functionality was extremely popular among the users because people are looking for ways to re-enable it. Some Redditors previously managed to bring it back by editing the Local State file. However, several users confirmed that the trick no longer works in Chrome 79 Beta.

Google To Bring Back “Close other tabs” Option

It is not the first time Google has removed a popular feature. The company recently removed the “Close other tabs” option from Google Chrome. This change received a huge backlash from the users and the company is now planning to restore it.

If you are interested to get this feature, the option will be available in Chrome Canary very soon. However, the change might take a few more weeks to make its way to the stable channel. Some people are annoyed by the fact that Google is slowly removing all those features that differentiated Chrome from Firefox.

It remains to be seen if Google reconsiders its decision to remove the overlay scrollbar flag in Chrome. If we look into history, the search giant rarely reverts a change. However, it all depends on your feedback as there are few similar instances.

Those who are want to get the flag should provide their feedback Chrome Help forum and Reddit forums. It is very much possible that Google might reconsider this decision

Update: We are glad to report that Google has restored the “Close other tabs” option in the tab context menu. A Reddit user Leopeva64 confirmed that the feature is now available in the latest Canary version (80.0.3959.0). It allows you to instantly close all your open tabs other than the one that is currently opened in your browser. 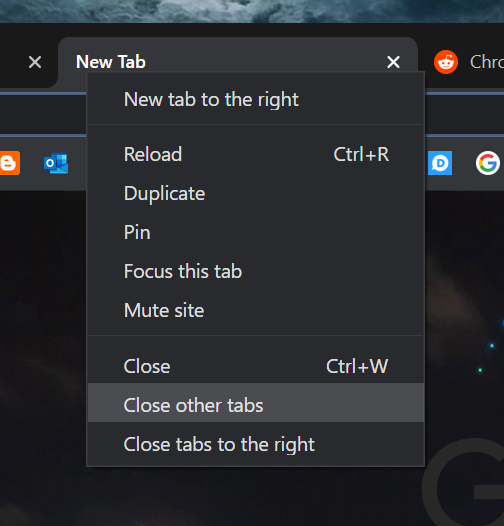